Distribution of Funds: Where the Money Goes

When you play any game run by the Danish National Lottery, the money you spend is split in a number of ways and a significant portion goes towards helping good causes across various different sectors. Find out more about the distribution of funds.

The two main purposes of the National Lottery are to bring joy to people’s lives and create benefit to the community. To achieve these twin ambitions it must generate a huge amount of revenue, so it can pay out big prizes to Lotto winners and also raise funds for those who need it in Denmark.

According to an Executive Order on payback percentages, at least 45 percent of the money brought in from ticket sales for games such as Saturday Lotto, Viking Lotto, Eurojackpot and Joker must be used to pay out prizes. For Keno it is 55%, for Alt eller Intet it is 61% and for Tips 13 it is 75%.

The lottery also has to cover its operating costs and pay commission to the retailers who sell tickets, but all of the profits go into a special fund and they are then distributed back to society. Known as the lottery’s Udlodningsmidler, the profits are distributed through six ministries. The percentage that goes to each ministry is shown in the table below: 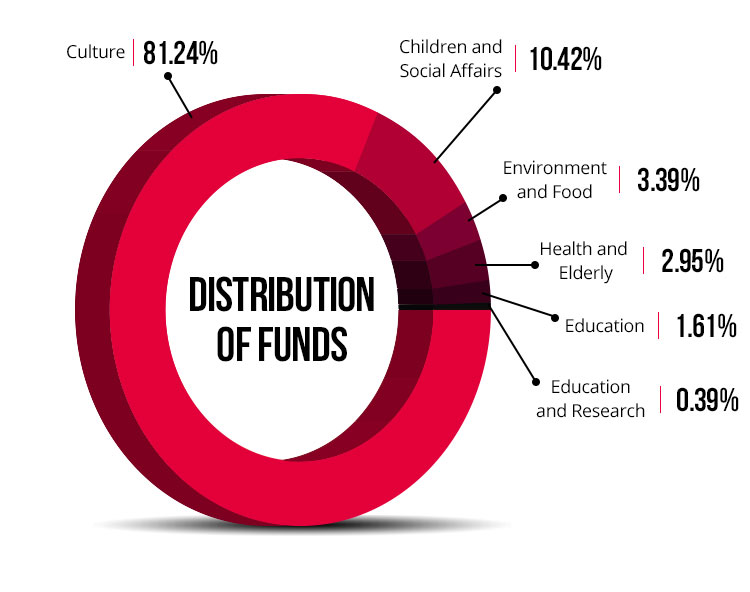 More than 1 billion kroner has been distributed through these ministries every year in recent times. Any project, large or small, can receive funding, but it must be a not-profit organisation that meets the relevant ministry’s requirements.

Around a third of the money - just over 30 percent of the Udlodningsmidler - goes to two major sports federations, Danmarks Idrætsforbund (DIF) and the Danske Gymnastik- & Idrætsforeninger (DGI). The DIF is the National Olympic Committee and Sports Confederation, while the DGI is an association of sports and gymnastics clubs. The money is mostly used to support the volunteers who work in the country’s sports organisations.

Sports is so heavily funded because it is seen as something that can promote a sense of community and core values such as determination, while success on the international stage also helps to create enthusiasm and bring people together.